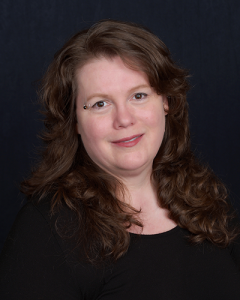 Angel Leigh McCoy writes paranormal suspense novels. She is the creative force behind the Wyrdwood dark fiction series and the Dire Multiverse world, including the “Dire Multiverse” audio drama, the Danika Dire video game (in production), and various works of fiction to come.

In her modern dark-fantasy Wyrdwood world, Angel has written a suspenseful trilogy, “The Wyrdwood Welcome“ trilogy, and two alternate history tales: a novelette titled “Charlie Darwin, or the Trine of 1809” and a short story, “Nurse Magdaleine.” She is currently working on a second trilogy set in Wyrdwood.

Angel has her own indie game studio called Games Omniverse. This group of ninja artists and game designers have been plugging away for years with Angel at the helm, working on a puzzle adventure game set in a magical modern world of The Dire Multiverse.

Dark was the Night contains a collection of her short Horror stories, not for the weak of heart.

Her list of publications spans three decades worth of overactive imagination.

She co-edited (with wily E.S. Magill and Chris Marrs) the Deep Cuts: Menace, Mayhem, & Misery, an anthology of fantastic short stories designed to pay tribute to women horror writers. It includes 19 stories by men and women both, as well as many recommendations for short horror stories written by women.

During her six years as the voice director and head editor at Wily Writers, she edited and produced more than 70 audio short stories, published two “Best Of” anthologies, and spearheaded the Twilight Zone tribute anthology: Another Dimension Anthology which won the Serling Award in 2017.

Angel has a long-standing history with designing and writing games, going back to 1992 when she wrote her first tabletop RPG content for White Wolf. She has worked for several AAA video game studios, including Remedy Games’ senior writer on CONTROL, ArenaNet’s (senior narrative designer on Guild Wars 2), Microsoft Game Studios, White Wolf’s World of Darkness, FASA, and other tabletop RPG companies. While working at Xbox.com, she was the official game correspondent Wireless Angel.

Angel got into story narration in 2012 when she launched Wily Writers, her speculative fiction e-zine. As the executive producer, she directed other narrators and produced stories she narrated herself. These days, she narrates novels and short stories for authors. Among her narration credits are The Year’s Best Hardcore Horror 3 by Comet Press, Behind the Mask: An Anthology of Heroic Proportions by Meerkat Press, and the Calamity Jayne series by Kathleen Bacchus.

In 2021, Angel built WilyWriters.NET as a private book-birthing space where dark-fiction writers can receive support, education, and encouragement for their publishing endeavors. The site provides members with promotional opportunities, education, tools, and support. She runs special events for members and produces content for the Wily Writers Youtube channel, including author readings, book recommendations, and roundtable discussions.

Angel lives with Boo, Simon, Stacey, Walter, Mama, and Lapis Lazuli (kitties) in Seattle, where the long, dark winters feed her penchant for all things spooky and cozy. (She/her, LGBTQ+)