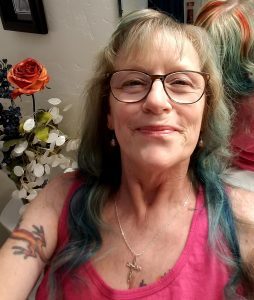 Yvonne Navarro is the author of Concrete Savior, Highborn, AfterAge, deadrush, Final Impact, Mirror Me and a bunch of other books, plus Buffy the Vampire Slayer novels and tie-in novels for Hellboy, Elektra, Supernatural, and others.

From her Amazon page:

I was born back in the early days when black and white photographs were considered normal instead of artsy. As a child, I always thought I’d grow up to be an artist, and I was convinced I’d spend my life doing line drawings of long, leggy models like the ones in the daily newspapers. Life, however, did not cooperate: a foul-up in grammar school resulted in a transfer to a local high school instead of the technical, arts-heavy one I’d planned to attend.

Following that was a move that really made things start winding around. By the time I returned to Chicago for the second time in 1981, I’d worked as a waitress, a nurse’s aide, a bookkeeper and gift shop cashier, an accounting clerk, and a secretary in everything from office furniture stores to a hotel to a journalism society. In 1981 I came back to my old job in a Chicago law firm and settled down in the Windy City for a while. In 1982, I tried to write because my mother said “You could do this.” The seed had still been planted, and I sold my first story in 1984. Since then I’ve written around a hundred stories, most of which have been or are scheduled to be published.

My first novel, AfterAge, was published in 1993 and was a finalist for the Bram Stoker Award for Superior Achievement in a First Novel. In 1995 my second solo novel, deadrush, was published, and it also was a finalist for the Bram Stoker Award, this time in the category of Superior Achievement in a novel. Final Impact, the third solo novel, was published in 1997, and won both the Chicago Women In Publishing’s Award for Excellence in Adult Fiction and the “Unreal Worlds” Award for Best Horror Paperback of 1997 from the Rocky Mountain News. Since then I’ve published several more solo novels, Red Shadows (a follow-up to Final Impact), DeadTimes, and That’s Not My Name, my first suspense novel. That’s Not My Name, Buffy the Vampire Slayer: Paleo, and Buffy the Vampire Slayer: The Willow Files, Vol. 2 all won at the Illinois State level of the IWPA 2001 Mate E. Palmer Communications contest (two first place and one second place, respectively), plus I somehow swept all three awards of the Short Story category with “Ascension,” “Divine Justice,” and “Santa Alma.”

I moved to my beloved Arizona in 2002 and currently work on historic Fort Huachuca, in southern Arizona. Numerically, I’m up to about twenty novels and one non-fiction book, with those never-ending plans for more. I love heat, Godiva chocolates, and Great Danes.

The list of Yvonne’s publications at ISFDB is vast. 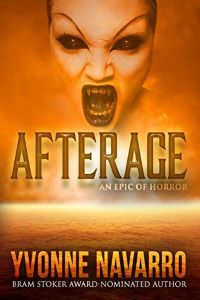 https://crossroadpress.com/product/afterage/
A plague of vampirism has crept across the country, reducing once-thriving cities to ghost towns. In Chicago, a few scattered survivors hide behind the fortified walls of office buildings and museums, raiding deserted stores for dwindling supplies of clothing and food.

Meanwhile, a hungry vampire population also struggles for survival as their prey grows scarce, forcing them to capture alive the last remaining humans as breeding stock for the blood farms that will ensure their future.

Now a small band of humans makes a desperate last stand against their vampire masters, fighting back with the only weapon that can kill the dead…

❖
No votes yet.
Please wait...
Did we earn a tip today?
$1.00 goes a long way. If you found this content helpful, drop a quick tip onto the table. We met the first goal that buys us two full-page ads in the HWA newsletter. Now, we’re working toward a goal of a banner ad at Nightmare Magazine.
0 comments… add one